NEWS
Tum Plastik exports to 42 countries
Turkish manufacturer Tum Plastik Ltd. started its activities in 1971 as supplier of plastic components to main industries. Today, the company is the leader of its country in terms of design, production and sales of equipment including pumps, ball valves, butterfly, checkvalves, unions,...

NEWS
Coleman® Spas re-branded as MAAX® Spas
MAAX® Spas has announced that it will no longer manufacture spas and hot-tubs under the Coleman® Spas by MAAX brand name and that the line of models will now be known as MAAX® Spas.

NEWS
New head office for SCP France and for the Rodez branch
On 29th February more than 200 people participated in the inauguration of the new buildings of head-office of SCP France and the SCP branch in Rodez. On this occasion, clients and suppliers had the opportunity to visit the new sites.

NEWS
Eco ™ Brand
Ecology is a major concern these days. That is the reason why Pentair Water Pool & Spa™ has decided to go green and will introduce the Eco ™ Brand for their environmentally friendly products during the Lyon Pool show 2008.

NEWS
European development
Proteus is strengthening its European development with the creation of an export management position held by Claudio Bonfanti. He will be in charge of the European distributors network, particularly in France, where it is directed by Julien Herrise and is already comprised of about twenty members.

NEWS
Rosalba BOARETTO, an exceptional woman
EurosPaPoolNews.com met Rosalba Boaretto, Manager of the Swimming Pools Business Unit of FLAG Soprema Group, one of the world leaders in the manufacturing of synthetic surfaces for waterproofing purposes mainly destined to the following sectors – underground works – plumbing works and...

NEWS
Un altro successo firmato CEMI
Cemi, market leader in the sector of water parks and wellness centres both in Italy and abroad, opens the 2008 year with a great event: the inauguration of “ELDORADO”, 45 000 m² dedicated to entertainment, wellness and health, studied and realized by Cemi.

NEWS
Fluidra reinforces its presence in Hungary
AstralPool, which belongs to the holding company Fluidra, has launched a new facility in October 2008. The new offices are located in the Leshegy industrial zone of the city of Szigetszentmiklos, very near to Budapest, Hungary.

NEWS
Solar energy for an olympic pool
The owners of the new premium Hotel "Las Playitas" in Fuerteventura, one of the Canary Islands, decided to have solar heating installed by Solar-Ripp to keep the 2 000 m3 of water in their Olympic training pool at a constant 25 to 26 C°.

NEWS
A Gold Medal for USSPA
The complete unit called Swim Spa XL and Combi Spa including the new cover structure with lifter USSPA was nominated at this year's International building fair in Brno, Czech Republic.

NEWS
Do you need a hostess, a photographer or a hotel for the Swimming Pool Show in Lyon?
Fill in the form now: we will forward your request to our partners.

NEWS
Third SCP agency in Portugal
Present in Portugal since 2001, the SCP - Poolcorp group demonstrates its willingness to pursue growth in the Iberian peninsula by opening its 3rd location in Santo Tirso, near Porto.

NEWS
Zodiac Days’09: Training program
Swimming-pools under the aegis of the letter Z: manufacturing and managing swimming-pools. Europool Italia, a company belonging to the Zodiac group, presents the preview of the Zodiac Days’09 initiative, a training course dedicated to swimming-pool experts split into 10 different courses held in...

NEWS
Skypool takes centre-stage at LIW
Astral’s temporary Skypool was used as the swimming pool in the wet-leisure area of the recent Leisure Industry Week exhibition at the NEC in Birmingham for the fourth year running.

NEWS
A constant training
For Gruppo Piscine Castiglione/Myrtha Pool guidelines are crucial. It is not only a matter of traditional training. The swimming-pool sector is in fact based on technical foundations, and requires special competences including technico-commercial engineers, technical designing abilities and last...

NEWS
SPLASH! breaks all records
SPLASH! has been hailed as the largest ever pool and spa trade show in Australia after breaking all industry records. The 93 exhibitors filled two halls of the Conrad Jupiters on the Gold Coast, totalling 1360 square-metres of floorspace.

NEWS
Interbad 2008 : the trade fair for knowledge and information on swimming pools and spas
Interbad 2008, which will take place 15 to 18 October for the first time at the new Stuttgart Trade Fair Centre, Europe’s most modern trade fair grounds, will provide first-class presentations and an abundance of knowledge to a high standard in the congresses taking place parallel to the event.

NEWS
Alkorplan 2000 at Olympic Games
RENOLIT membranes were in attendance at the aquatic events in Beijing. In close collaboration with the clients A&T Italy and Europool China, RENOLIT Ibérica participated in the refurbishment of the Ying Tung Natatorium in the Chinese capital.

NEWS
Olympic gold for Starline Pool?
The Dutch Dolphin is up to speed and after a couple of strokes he taps the side. Pieter van den Hoogenband trains in his own pool. Normally he does so at the brand new Dutch National Swimming center in Eindhoven 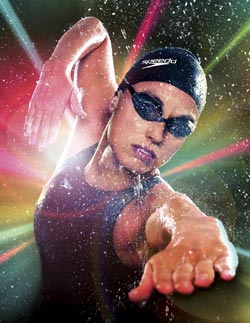