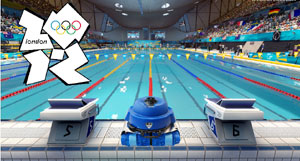 Hexagone, leader in France and No. 2 in Europe, certainly won Olympic gold by equipping the London Olympic pool and 4 other pools in the city!

The year 2012 has been a record-breaking year for Hexagone with the significant supply contract for all the pools in Paris and the replacement of a number of pool robots in Berlin, Vienna, Milan, Madrid…

Hexagone robots are smart and shrewd, and at the forefront of innovation with a new generation of talking robots, thus furthering the man-machine relationship.

Service, through its subsidiaries and its own team of technicians on site is not left out either, with a self-diagnosis that is even more strict, and artificial intelligence that enables the robot to operate even in case of minor hitches.

Hexagone is available throughout Germany through its direct subsidiary. HEXAGONE will be present on Stand 6B56 at INTERBAD 2012, and on stand 4G40, at PISCINE 2012 in Lyons.