Dietmar Rogg of Schmalenberger is the new bsw-President 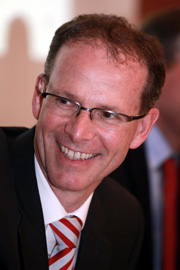 Dietmar Rogg of Schmalenberger is the new BSW-President (German Association of Swimming Pools). After a twelve year office term, the CEO (Chief Operating Officer) of Tubingen-based Company Schmalenberger is succeeding Guido Rengers (Riviera Pool), who did not run for the post again after finishing four office terms. The imprint left by Rengers is huge, but so is the enthusiasm of Dietmar Rogg.


In his acceptance speech, he not only recognized the merits of his predecessor, but also made it clear where his strong points lie. He also spoke about global challenges facing the industry, as well as about the trade fair scenario of this sector in Germany. Rogg wishes to address the subject of skill and further training, so that the swimming pool sector in Germany can safely overcome the shortage of professionals. Supporting the youth is something that lies close to his heart.

He wants to make the swimming pool sector more visible and wishes to find ways to approach the potential clients in a targeted manner.


The new BSW-President is well-versed in advertising and public relations not only because he is a member of the BSW- committee for PR and marketing, but also because on completing his degree in management, he managed to gather experience in this field.

The first board meeting in a new position has to be organized, the preparations for Information Day 2013 are in full swing and in matters of skills and further training, early results should start coming soon. Dietmar ROGG is going about his new responsibilities in an ambitious and determined way, for he also happens to “know” the sector for the last twenty years.