For the opening ceremony of the new COMPASS CERAMIC POOLS factory we met Miro RUZIAK, Commercial Director and shareholder of the company.

About 200 people from a dozen countries, European and others, came to the opening ceremony of the new COMPASS CERAMIC POOLS factory on June 2 last year in Senec, near Bratislava.

The programme included a guided tour of the new factory for all the guests in groups and a presentation by Zoltan BERGHAUER, CEO and Partner, Miro RUZIAK, Sales Director and shareholder with Tibor MESZAROS, the Executive Director.

There was a series of small events hosted by some well-known Slovakian celebrities, exquisite catering and live music.


Mr. RUZIAK, how long did the reconstruction of the factory take and how much did it cost?


The fire occurred on July 16, 2015; since then we have worked hard to re-open the factory as quickly as possible. We have invested about € 1.5 million in reconstruction and in the meantime we hired a temporary production unit enabling us to remain active in the marketplace, albeit with a reduced capacity. 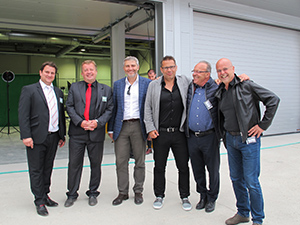 What are the main features of the new plant?


We have added offices that were not there before. Spray systems and advanced air-conditioning have also been installed; however, the main thing is that we have doubled our production capacity and now turn out 10 pools a day.


What are your next objectives?


We must first bring production up to speed and meet the needs of all our customers; they have been very understanding about the difficulties caused by the fire and we would like to thank them deeply for this. We have also set in motion a new R & D process that will soon give rise to new product features.