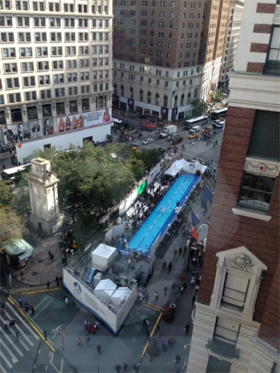 Myrtha Pools is proud to supply the swimming pool for the NYAD48 event being held in Herald Square NYC on October 8-10, 2013 in New York City’s Herald Square just outside of Macy’s.

Myrtha Pools has teamed up on several occasions for special events such as this with Spear Corporation, an Indiana based pool design, installation and Service Company; Sunbelt Pools, a Texas based commercial pool construction company; and Neptune Benson, a Rhode Island based pool filtration manufacturer.

Myrtha Pools, together with this team, have previously installed two Olympic sized pools in Omaha, NE at the Century Link Center for the 2012 US Olympic Swimming Team Trials in just 10 days.

This is an Olympic fete in itself; however, this pool must be erected in the middle one of the busiest cities in the U.S. and ready for Diana to enter the pool in less than 24 hours. 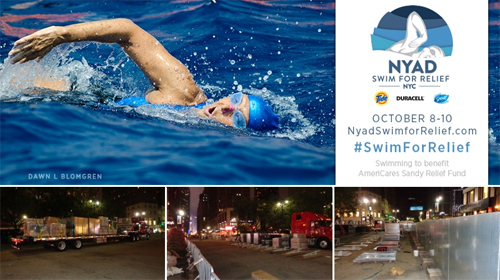