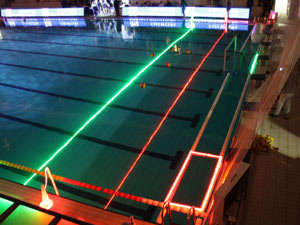 This innovative visual information system designed for water polo and chosen by the International Swimming Federation was used for the very first time during an Olympic competition.


The Waterpolo Visual System, the most important technological innovation of recent years in the world of water polo, is a system of dramatization that uses LED light sources fitted in specific areas inside and outside the game area. It allows athletes, referees, judges, the audience present, and television broadcast viewers to watch the progress of the game in real time.

In addition, the WVS also helps beginners to understand how water polo is played and provides greater transparency with regard to the decisions of arbitrators and the jury during games.


Using lights and colours, the system demarcates areas in the pool and also indicates playing time: flashing tube-lights indicate the last five seconds of strikes, during thirty seconds. The re-entry area for players that are expulsed change from red to green when the twenty-second expulsion is over. LED underwater lines indicate the two-meter lines (where the cones are placed) and five-meter lines (from where penalty shots are taken after a foul, without passing the ball to a team-mate).  These lines are at present indicated only by dots on the boundary of the pool, which makes it difficult to view the game, and makes the task of the judges more complicated. 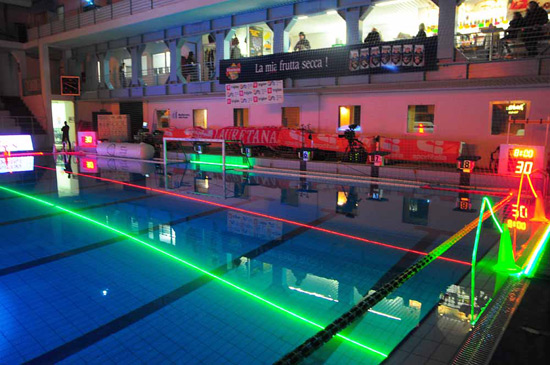