FLASH
Darlly Europe : From Bed Bugs to...
SCP EUROPE : The 5th edition of...
Dryden Aqua is building the...
The international Pool and Spa...

The Group Siebec and its subsidiary Weltico, have moved to their new premises near Grenoble, at Saint-Egrève. Now the company disposes of a surface area of 4,000 m², with 700 m² of office space and 3,300 m² divided equally into a workshop and a storage area. At this particular site, the company manufactures pool equipment for its subsidiary, WELTICO, specializing in filtration and sealing  components for private swimming pools.

The SIEBEC Group has recently appointed David HAMOUNI as head of its subsidiary WELTICO; he also becomes a Director of the company. He has been with the company for 11 years, starting as a Sales Representative, then rose to become Sales Director. He is backed by a team of 9, divided between production, marketing and logistics.

In fact, most often, manufacturing is carried out in another unit or outside the Group. Weltico thus ensures ad-hoc production and focuses mainly on customer service. The subsidiary operates in two distinct markets: distributors - such as SCP, CEC, Interplast, Mareva, etc., and pool installers and builders - such as Caron Piscines, Aquinox, Mondial Piscine, among others. 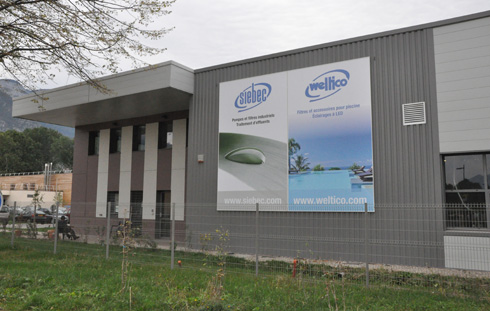