Procopi Deutschland has inaugurated in June 2012 a new training and exhibition center in Meißen, Sachsen. Procopi opened a warehouse and aftersales service center in Meißen in January 2011, and the addition of this modern training center for its regional customers, was the next logical step. 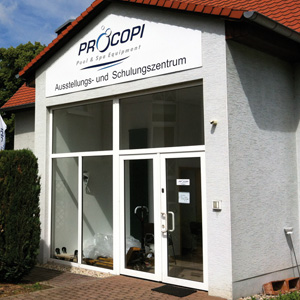 The center, spread over two floors, includes a large showroom, training rooms, kitchen and even a „Kellerbar“… The Vertriebsleiter from Procopi, Martin Platza, who is based at the Meissen agency, plans a series of technical and commercial seminars on various subjects—already planned are Dosing Systems, automatic covers, whirlpools and heating solutions. The showroom is available to the trade partners in the area, where Procopi‘s range of whirlpools are permanently on show, to use with their end customers. This investment by Procopi confirms its committment to offering a regional sales and technical support - Procopi has two agencies in Germany, in Erlangen and Meißen, aswell as a further 16 distribution centers around the world.