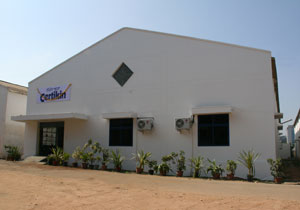 Certikin India’s expansion programme has resulted in the company moving into larger headquarters premises in Bangalore in the southern Indian state of Karnataka.


The relocation will be followed by a new regional office and warehouse in Delhi to be opened by the end of June, and a new branch in Mumbai later in the year.


At a recent ceremony, customers were invited to the new head office and its adjoining 78,000 sq/ft warehouse, with an evening cocktail and dinner reception being hosted by Certikin India’s Sales Director, Muthu Venkata Selvam and his team. Certikin International’s Export Director, Jo Ainsworth, was also in attendance.


Jo says: “Since its inception just four years ago, Certikin India has gone from strength to strength. The company is expanding its operations in response to an increased demand for pool products and in order to provide customers with an improved service and greater stockholding. The company can supply products for all swimming pool applications.”