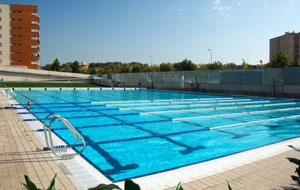 Recently, the Club Nataciò Sabadell, one of Spain’s leading swimming clubs, has opened its new outdoor water area which includes an emblematic Olympic pool and a unique aquatic playground for children.

The almost century-old Club (celebrating its first century in 2016) that is situated in the Catalan city of Sabadell in the North of Spain has opted for spectacular new facilities that form part of a strategic plan that seeks to further position the club among the European leaders of elite swimming clubs.

The spectacular Olympic swimming pool has been lined with the reinforced membrane RENOLIT ALKORPLAN 2000 in white colour and the marking lanes are formed of black stripes of the same material welded on top of the lining.

The reinforced membrane was chosen for the project because it provides a complete waterproof seal of the swimming pool and is ideally suited to outdoor weather conditions. Thanks to its unique lacquer protection the RENOLIT ALKORPLAN 2000 has a high resistance to aesthetic degradation, ageing, ultraviolet rays, dirt, stains and fungi.

The Olympic swimming pool comes with some special features. Part of the floor is made with a liftable platform, a pioneer in the Spanish state, which allows modifying the depth of the pool floor. It also has a modern mobile bridge thank to which the pool can be divided into two 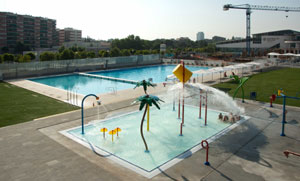 parts to perform different activities at the same time. These elements enhance the variability of the pool significantly.

In addition to the Olympic pool, the aquatic playground was also lined with white RENOLIT ALKORPLAN 2000. For this area, the flexibility of the material to adapt to all kind of shapes and it’s resistance to UV rays were of major importance. Finally, even the water tank of the pool was waterproofed with the reinforced swimming pool membrane.