Home > Market news > Inauguration of the SCP agency in...

Inauguration of the SCP agency in Lyon 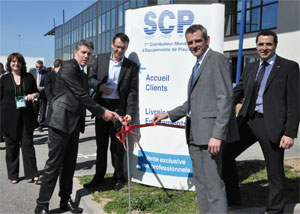 On the 25th March 2011, Philippe GALUDEC, the director of the SCP agency in Lyon, and his team of twenty, celebrated the opening of their new premises in the Genas industrial zone.

More spacious and well laid out, in the midst of pleasant surroundings, the new agency in Lyon consists of two blocks with a 2,700m² warehouse with a storage capacity of nearly 3,000 pallets and an office space of 400m². Several suppliers and around 150 professionals from in and around the Rhone-Alpes region attended the inauguration which was followed by a cocktail / buffet with the entire staff of SCP Europe (Sylvia Monfort, Jean-Louis ALBOUY, Eric GALAIS).  SCP France was also present (including Daniel BOS and Guillaume VAGANAY).  On the eve of the inauguration, a select group of VIP customers and suppliers were invited to a private dinner.