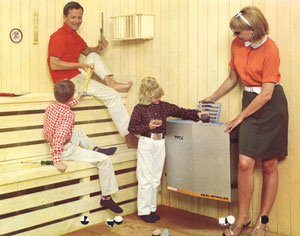 company was started in a woodshed on Snöstorpsvägen, Sweden, and the operation initially consisted of spinning coils for electrical elements. Six decades later, Tylö is selling its products in around ninety countries throughout the world. Few companies have had such steady growth as Tylö, whose innovation-focused, development -oriented and sound operations have guaranteed that the company has always been successful, regardless of what way the business cycle has turned.

Through the years, the inhabitants of Halmstad have been able to see with their own eyes how the company has grown through continuous expansion in the Larsfrid area, where Sven-Olof Janson moved the operation in 1960 when it had grown so much that it required more space. In 2010, Tylö celebrates its 60th anniversary in many different ways. An anniversary book will recount the sixty years in detail, and in September, the annual international conference for retailers will be characterized by the celebration of the 60th anniversary.