| Other languages
Despite the current economic climate, the swimming pool sector continues to be dynamic in Spain where between 20,000 and 25,000 units are expected to be built in 2009, according to data from the professional associations ASOFAP and ATEP. A market study compiled by Market AAD for Piscina BCN and the professional associations reveals that almost half the pools in the country are over 10 years old, which makes their renovation a big business opportunity.

The swimming poolmedia.eurospapoolnews.com/pdf/barcelona09_4Summary_results_en.pdf sector in Spain is well established thanks to the good climate, tourism and recreational culture, and the economic development experienced in recent years. All of this has made the Spanish market a world reference, both for the number of swimming pool installed, over 1.1 million, and for the existence of internationally prestigious manufacturers and professionals. The sector in Spain has an annual turnover of more than 1,300 million euros, over 2,000 companies and some 12,500 direct and 50,000 indirect employees, according to data from the Asociación de Fabricantes de Equipos, Productos Químicos y Constructores de Piscinas, ASOFAP, and the Asociación Española de Industriales y Técnicos de Piscinas e Instalaciones Deportivas, ATEP.

The swimming pool in the new water culture

The population’s growing interest in health, wellness and exercise also benefits companies in the sector. Wellness has become one of the main consumer motivations –equating to 46.7% in the final decision- and, according to the report by Market AAD, this will increase.

The report also highlights the importance of the fact that the industry is committed to a new, more ecological form of swimming pool maintenance, thereby ending the myth that they are not sustainable. In fact, in Spain, 89% of owners do not empty their swimming pool in the winter.

The importance of the end client

Clients are increasingly better informed – use of the internet is up-, and they are more active in the purchase decision-making process. Builders and manufacturers must make an effort to discover the preferences, needs and expectations of potential consumers whose profile has also become much broader in recent years; it is currently very heterogeneous, since it is no longer a luxury for many Spanish families and adapts to all budgets and possibilities.

The international show Piscina BCN has become established as one biggest events of its kind in Europe and a global reference. 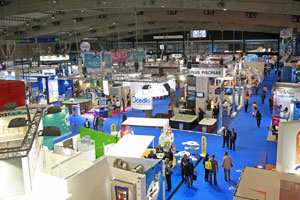 The next edition of the show, which will be held from the 20th to the 23rd of October 2009 in the Gran Via exhibition centre, will feature a new sector: sports and recreational facilities. It is a growing sector due to the population’s increasing interest in sport, health and wellness.

In order to support this new sector, the show will host the first Ibero-American Congress on Sports and Recreational Facilities, CIDYR, organised by ASOFAP and the Asociación Iberoamericana de Instalaciones Deportivas y Recreativas, AIA-idyr. This congress, which has the backing of the Consejo Superior de Deportes, CSD, the Consejo Iberoamericano del Deporte, CID, and the Federación Española de Municipios y Provincias, FEMP, will bring together professionals from Latin America, Spain and Portugal.

The show will also be hosting the Piscina BCN awards for exhibitors. Just like at the last edition, it is divided into two categories: the first is given for the best technological innovation and the second specific award which, this year, will go to the best safety proposal. These awards are judged by a technical panel of prestigious professionals in the fields of construction, swimming pools, wellness and sports and recreational facilities.