The National Swimming Pool Foundation® (NSPF) has announced the election of a new President, Vice President, Treasurer, and Secretary of its Board of Directors. Additionally, in January 2019 Michelle Kavanaugh will assume the role of Executive Director of The Pool Spa & Aquatics Alliance (The Alliance) and The California Pool & Spa Association (CPSA). NSPF has named Andrew Roberts as its new Mission Development Manager. 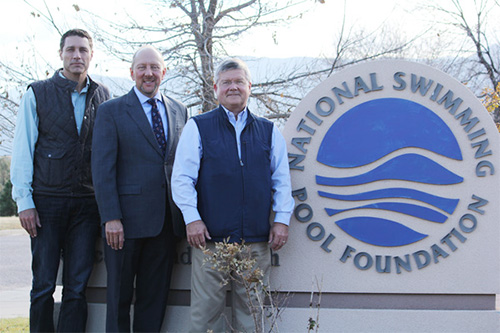 From the left to the right: Rob Butcher, President - Tom Lachocki, CEO

The new officers are experienced members of NSPF’s Board. Swim Across America CEO and 6-year Board member Rob Butcher will replace G. Bruce Dunn as President, and Ecolab’s James R. Mock—an NSPF Instructor for over 15 years—will serve as Vice President. Karl R. Frykman and Captain Julie Gilchrist, M.D., have assumed the roles of Treasurer and Secretary, respectively. This new leadership provides expertise in precisely those areas that have historically shaped NSPF’s mission: philanthropy, industry savvy, and public health.
Outgoing President G. Bruce Dunn departs NSPF’s Board after having served for three years, during which time he helped forge new ties between NSPF and both GENESIS and The Alliance.

Michelle Kavanaugh’s appointment as Executive Director of CPSA and The Alliance fills the vacancy left by Eileen Benjamin’s departure earlier this year due to unforeseen health concerns.


Kavanaugh’s new role is a natural extension of her work in recent years with CPSA and The Alliance, and though her job there will certainly benefit from that relationship, she will be missed by NSPF staff and customers. In her 13-year tenure with NSPF, Kavanaugh has been instrumental in supporting the organization’s mission and expanding its reach. Her work as Mission Development Director has included overseeing the World Aquatic Health Conference and administering Instructor Assessment schools for the Instructor Education Committee.
“Michelle’s success and growth at NSPF stands out as she has been instrumental in helping NSPF achieve its strategic objectives for many years. We are excited that she will still be a part of the family in her new role at CPSA,” says CEO Tom Lachocki.


Central among Kavanaugh’s many accomplishments at NSPF is her history of fostering strong partnerships with individuals and businesses interested in offering NSPF certifications. Long a primary point of contact for NSPF instructors, Kavanaugh assumes her new position with an expertise that will guarantee that industry professionals have an advocate who understands their concerns.
“It has been an honor to serve the mission of NSPF as it supports the growth of recreational water use and safety. For 13 years, I have built tremendous relationships with students, instructors and partners of NSPF and I look forward to continuing those relationships in my new role as Executive Director of The Alliance,” says Kavanaugh.

Incoming Mission Development Manager Andrew Roberts joins NSPF with a thorough knowledge of the industry, evident in his many trade show talks on water treatment and wide publication history on water quality testing. A small business owner with diverse interests, Roberts spent seven years working for Industrial Test Systems, Inc. (ITS), most recently as Business Development Manager, and is one of the inventors and patent holders of ITS’s photometer. His business acumen and industry expertise are matched only by his passion for the field.

Roberts says of his new post, “This is an opportunity to be involved in an industry I’ve come to love. Working with NSPF is a chance to help grow a mission I value—making people more aware of what NSPF is, why it’s a benefit to the industry, and how they can get involved—and above all to support recreational water growth.”