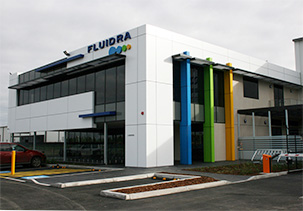 Fluidra strengthens its presence in Australia and South Africa following the move to its new facilities. These investments respond to the need to adapt to growing demand.
The new worksites will enable the company to increase its production capacity, in line with the road map for the Strategic Plan in this area.

Fluidra, the listed Spanish multinational group dedicated to the development of applications for the sustainable use of water, has opened new facilities of more than 20,000 m² in Australia and more than 15,000 m² in South Africa. The investment of around 5 million euros made in 2015 and 2016 was spent on adapting the worksites leased from third parties, as well as on product development for these markets. This spending responds to the need for expansion in order to satisfy the sustained growth in demand recorded in these two areas.

The new worksite in Melbourne involves the move of the current production plant and warehouses to a new space specifically designed to respond to the multinational’s production and distribution needs in a market that is currently led by AstralPool and in which it has forecast organic growth of 8% during 2016.

In South Africa, Fluidra has moved three production plants and a warehouse to a new worksite in Johannesburg in order to better handle its business in South Africa and its area of influence, which it has been forecast will experience organic growth of 10% during 2016.

Eloi Planes, Fluidra’s executive president, explained: “Thanks to these new worksites we will significantly increase our capacity to respond to customers in strategic markets for the group in the southern hemisphere”.

Fluidra’s 2018 Strategic Plan is made up of three fundamental cornerstones: a focus on the Pool and Wellness sector, increased market penetration in markets through its international subsidiaries, and the extension of best practices in key areas (sales, manufacturing and logistics) in all of the countries in which it operates.