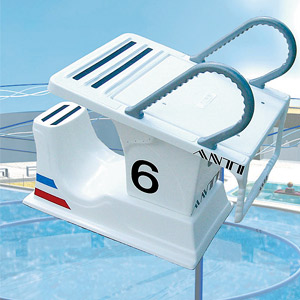 Having patented and supplied the ‘Anti Goal’ for water polo at the Munich 1972 Olympics, the company patented the Anti Wave Swimming Racing Lanes, which were selected for the 1975 FINA World Championships in Colombia.

Its swimming starting-block Track Starts have been used worldwide since their introduction at the 2008 Beijing Olympics.