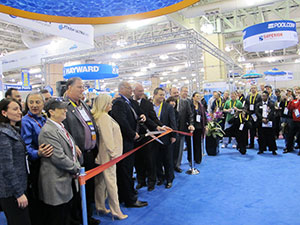 Tens of thousands of pool & spa industry professionals made their annual trip to New Jersey for the 33rd Annual Pool & Spa Show. Attendees took part in the multi-day education conference and hit the Show Floor to visit with 414 exhibitors from the pool and spa industry.

The Show kicks off with a toast

Hundreds of attendees and exhibitors were part of a special ceremony that took place as the exhibit floor opened on Tuesday morning. During the brief ceremony, the Northeast Spa and Pool Association announced that the Show (formerly the Atlantic City Pool & Spa Show) would now be called The Pool & Spa Show powered by the Northeast Spa and Pool Association and the Show’s new logo was unveiled.

The Show’s name formally acknowledges the Northeast Spa & Pool Association as the driving force behind the Show, establishes a unique brand for the Show outside of its location and reflects both what the Show has become – a leading pool and spa show in the industry.

During his speech Northeast Spa & Pool Association Vice President and 2014 Show Chair, John Migliaccio noted that, “What has made this Show a success is that it is made by pool and spa people for pool and spa people. It has really given us an edge each year and it’s because of this we’ve developed a reputation not just in the Northeast but around the country and beyond for being the industry’s must attend Show. We are excited to introduce the new Show name which truly reflects who we are and where the Show is headed in the future.”

The new Show name and logo were launched at the 2014 Show opening and will be used for the 2015 Show. The Show will also launch a new website www.ThePoolSpaShow.com.

“Now that the secret is out, the fun part can begin,” said Show Manager, Trish McCormick. “Get ready to see our Show look transform this year as we embrace our new name and brand as we focus on 2015 and beyond.” 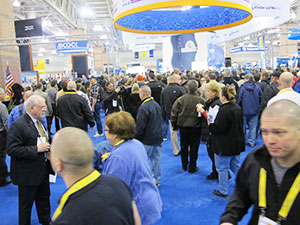 Starting with the Show Opening on Tuesday, there was a steady stream of Show attendees crisscrossing the exhibit floor looking to connect with longtime industry contacts, to meet new companies and to see the latest products, services and innovations the industry has to offer.

Despite the deep freeze that continued to wreak havoc on travel across much of the east coast and a significant snow storm on Wednesday, Show attendance was strong dipping just slightly from last year.

“Instead of coming in for a day, the majority of our attendees are coming and staying for the week. They are taking classes each morning and hitting the Show Floor for meetings each afternoon. With an over 12% jump in overnight stays this year alone, we expect this trend to continue.” said McCormick.

The positive energy on the Show Floor came from both exhibitors and attendees. The industry as a whole feels like it turned a true corner and is making a rebound as we move into 2014.

“Reports back from exhibitors have been nothing short of fantastic and what I keep hearing is that people weren’t just shopping around but they were at the Show to buy,” said McCormick.  “What continues to bring back exhibitors for years and even decades is the quality of the buyers hitting the floor year after year. And this year was no exception.”


For the second straight year, there was recording breaking attendance at the multi-day Education Conference. This year’s conference included over 75 seminars with 50 plus technical seminars and more than 25 business seminars. Education attendance grew by 15 percent this year as more and more businesses took advantage of the diverse education schedule offered at the Show.

“Each year, we try and create that right balance in our education offerings. Our goal is to bring innovative ideas and courses to both the technical and business programs while also bringing a fresh prospective to the tried and true courses attendees depend on us offering each year.  It’s really paying off as we see our attendance continue to grow each year,” said Show Education Director, Paulette Pitrak.

Once again there was good attendance in the Conference’s Water Chemistry Courses including the first offering of a Spanish language version of the Course.

“As we develop our program each year, we spend a lot of time talking with pool and spa people and listening to what their businesses need. We recognized a demand for Spanish language education and the high attendance reinforced that,” added Pitrak.


The 2015 Pool & Spa Show will take place on January 27 – 29, 2015 at the Atlantic City Convention Center in New Jersey. To learn more about the 2015 Show professionals can follow all information  on Facebook or Twitter.

Some of the exhibitors