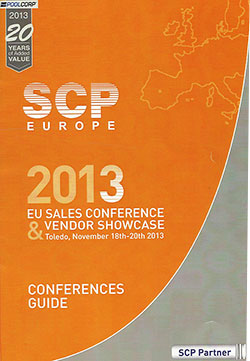 SCP Europe recently organized the second edition of its "Sales Conference & Vendors Showcase" in Toledo, Spain, from the 18th to 20th November 2013.  An occasion to also celebrate the 20th anniversary of POOLCORP and the 10th of its subsidiary in Spain – a subsidiary that recently equipped itself with new and modern equipment, demonstrating the commitment of the company and its capacity to invest in the long term.


During 3 days, in a magnificent setting, all the SCP teams from Europe, the world's leading manufacturers in the Pool and Wellness market, and SCP partner brands joined in the festivities at the Hilton hotel in Toledo.

During these very studious days, alternating between visits to the stands, conferences and technical training, albeit in a festive spirit, more than 130 decision makers and the principal SCP heads from 7 countries and 13 sales offices in Europe, were able to meet their privileged suppliers during high-quality discussions.

Manufacturer-partners of SCP, both long-standing and recent arrivals, representing a total of 40 suppliers, were able to present their new products for 2014 and all their product lines, exchange views on the market situation and their innovations, give details of their pre-season offers, promote their services, etc.