Celebrating exactly a year to go until the London 2012 Olympics, the Olympic Delivery Authority (ODA) has announced that the Aquatics Centre is now complete – on time and on budget. 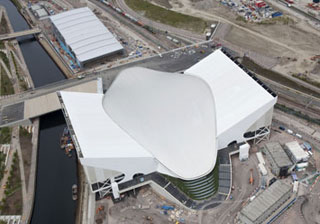 Double Commonwealth Games Gold medallist Tom Daley celebrated the event by performing the first dive into the Olympic Diving Pool on 27 July in front of the cameras.

Mayor of London Boris Johnson said: “It’s fantastic to add the beautiful Aquatics Centre to London’s list of first class venues which are already set to welcome the world’s greatest sportsmen and women. To have all six permanent venues complete with a year still to go to the Games is a great achievement, and a firm sign that we are well on track to deliver a truly spectacular show in 2012. Congratulations to the ODA and all those who have worked on the construction of the Olympic Park for reaching this milestone.”

Construction started on the Aquatics Centre in June 2008 and has been completed on time and with an exemplary safety record. Over 3600 people have worked on the construction of the venue, and over 370 UK businesses have won contracts on the project, including: